Julia Rodriguez: “'A Scale on Which the Cultural Achievements...May be Laid Down': Measuring Civilizations in Early Americanist Anthropology"

Add to your calendar

Confirming the relational status of Old and New World civilizations was an explicit goal of Americanism, a brand-new scientific field in the late nineteenth century. Precursor to both area studies and modern anthropology, Americanism emerged in the 1870s as an international network of natural and social scientists united in their dedication to the continent-wide study of racial and cultural diversity of American peoples. They sought answers to age-old questions such as: is there one race or many? Where did high achieving civilizations originate? How do civilizations relate to each other?

Americanists, by definition, worked throughout the American hemisphere with the traces of these great civilizations – believed to be located firmly in the past – as a key form of evidence for theories of universal cultural evolution. Scientists descended in particular and with great excitement on Latin American sites (perceived to be newly accessible to them), ranging from the “grand civilizations” of the Aztec and Inca to smaller-scale and nomadic tribes such as the Botocudo of Brazil and the Fuegians of Chile and Argentina. In those sacred places, anthropologists and archaeologists plundered burial grounds, learned of Indigenous languages, collected newly discovered codices and colonial-era texts, and excavated archaeological ruins. This paper, part of a larger study of Americanism as an influential and co-produced network of knowledge, focuses on scientists’ attempts to solve the puzzle of civilization with three types of evidence from (Latin) America: monuments and ruins; pre-Columbian economic and legal systems; and achievements in science and math. I explore how the Americanists’ pursuit of measurable metrics of civilization was framed by a centuries-long (and still unresolved) tension among human scientists, who remained divided over philosophies of human difference and ranking. At the same time, I share how Americanists’ engagement with the traces of pre- Columbian civilizations was facilitated, limited, and shaped by their contemporaries: living Indigenous peoples. 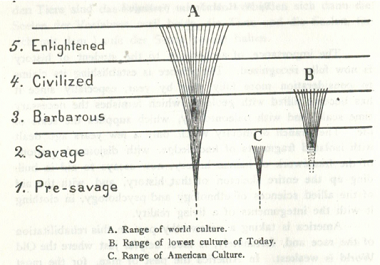